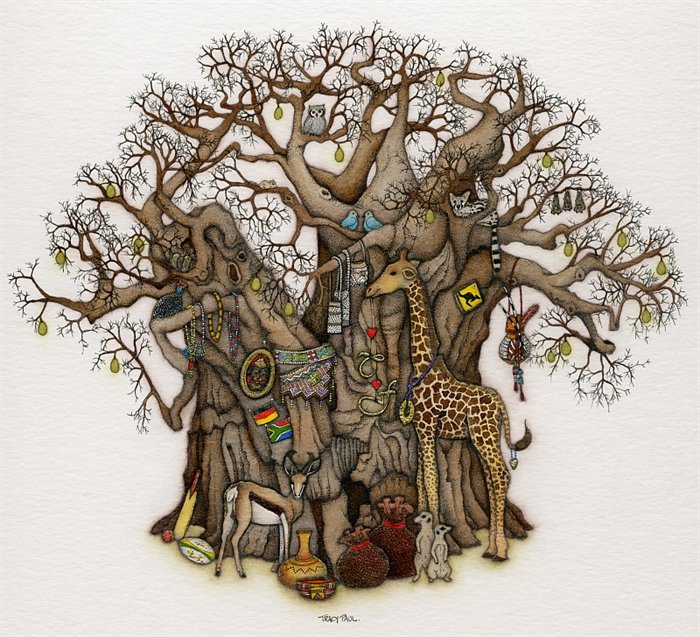 The mysterious baobab tree is steeped in legends, a vast fleshy giant that has been waving its Medusa-like branches over the African bush for a recorded excess of 1,500 years. A strong contender for the world’s largest tree, there is much more to the baobab tree than its physical appearance, properties and mystical qualities.
The baobab tree represents life, fertility and is a keeper of the earth. There is a belief that women living where baobabs are plentiful have more children –which is possibly because these women eat soup made of baobab leaves which are rich in vitamins and EFA. Baobab fruit powder too, is rich in vitamin C, anti-oxidants, magnesium, potassium and dietary fibre all of which would contribute to good prenatal health. The baobab tree is also known to make a great meal for passing elephants.

With its vast size and history, the baobab is unsurprisingly steeped in folklore, and these are but a few intriguing tales inspired by this monolithic African legend.

The upside down tree

One of the best known legends of the baobab and its upside down appearance is that of the first baobab and his rather ungrateful behaviour. The legend goes, that as this first baobab grew taller and taller next to a small lake, it became aware of the beauty of flame trees and the fruits of the fig trees. When one day it became tall enough to see its reflection in the lake, and was not impressed with his own fat trunk covered in wrinkled bark, tiny leaves and pale, creamy flowers.
Very upset, the baobab complained bitterly to the Creator about what he saw as a raw deal in the looks department. The creator tried to explain that the trees beauty lay in its immense benefits to the earth and those who inhabit it, to nourish, house and protect it. Unconvinced and undeterred, the baobab continued his complaining until one day the creator pulled the tree from the ground and replanted it upside down, so that it could never again see its reflection nor utter a complaint. Forever since the baobab has been paying off its transgressions by being the most useful treea around.

In Madagascar, home to six species of baobab, you’ll find the famous Baobab Amoureux – two Adansonia za trees twisted together. Legend has it that centuries ago, a young man and young woman from two nearby villages fell in love and wanted to be together forever. However, this was not to be because, as was tradition, both had already been assigned a partner and had to marry separately in their respective villages.

Despite this, the impossible couple continued to dream of a common life and having a child together. They secretly asked their god to help them and so the two baobabs were born and grew together across the centuries – together as one for eternity, as the couple always wished.

The tree that eats maidens

In Zambia’s Kafue National Park a particularly large specimen is known to the locals as kondanamwali (the tree that eats maidens). According to legend, the tree fell in love with four local girls, who shunned the tree and sought human husbands instead. In revenge, the tree pulled the maidens in to its interior and kept them there forever.

It has been said that any person who plucks the flowers of the baobab, which bloom only at night, will be torn apart by lions, because there are spirits in the flowers. Similarly it was believed that if you drink the water in which pips from the baobab fruit were soaked, you will become mighty and be protected from danger.